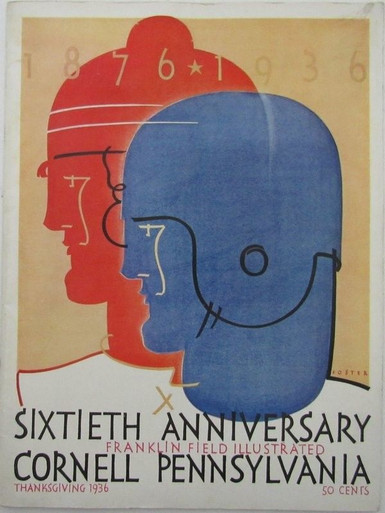 Cornell v. Penn Football Program 1936, played Thanksgiving Day, Franklin Field, Philadelphia. Front cover a little soiled, overall very good condition. Program measures 9 inches x 12 inches. 60 pages, includes complete statistical record for all the inter-collegiate games played by Penn since 1876. This game was played on Thanksgiving Day at Franklin Field, as was the tradition, as the weather at Cornell was not as predictable. Cornell and Penn have played the game in Philadelphia 68 consecutive times. Since 1964 games have been held at both Ithaca and Philadelphia. Penn's rivalry with Cornell is the fifth most played college football rivalry of all time. Their first game was in 1893 and they have played every year since, except in 1918. Since 1995, the winner of the Cornell-Penn football game has been awarded the Trustees' Cup. Black and white pictures of players from both teams. Many vintage advertisements including Coca Cola, Bookbinders, and Royal typewriters. Nice art deco cover illustration by longtime Penn illustrator Robert Foster.