When was the great American pastime first played in the United States? It is sometimes cited that the earliest reference to baseball was a 1791 Pittsfield, Massachusetts law banning the playing of the game within 80 yards of the town meeting house. In fact, the Library of Congress recognizes the first reference was by a Princeton College student in 1786.

A very early student at Princeton College, John Rhea Smith, kept a diary of his days studying there. He captured the trials and tribulations of being away as a young man, complained about the food and about the need to get up so early, and gave an account of what it was like to be a student in the eighteenth century. Generally mornings were dedicated to studying and afternoons were set aside for walking and leisure activities. One early spring day Smith noted the following in his diary:

Wednesday March 22nd 1786 - "A fine day play Baste Ball but am beaten for I miss both catching and striking the ball." 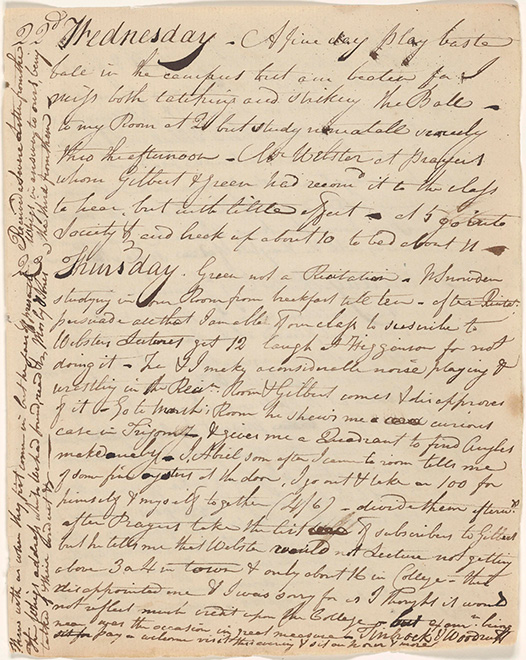 Smith's diary page compliments of the Library of Congress

Baste Ball is an early spelling of baseball, and it sounds strikingly familiar to the modern game.

The faculty of Princeton did not approve. Their minutes from 18 months later issued a scathing attack on the game. From the reading of it, you'd think that the students were engaged in sky diving or auto racing. The faculty statement banning baseball:

"It appearing that a play at present much practiced by the smaller boys among the students and by the grammar scholars with balls and sticks in the back common of the College is in itself low and unbecoming gentlemen & students and is as much as it is an exercise attended with great danger to the health by sudden and alternate heats and colds as it tends by accidents almost unavoidable in that play to disfiguring and maiming those who are engaged in it for whose health and safety as well as improvement in study as far as depends on our exertions we are accountable to their Parents & liable to be severely blamed by them: and in as much as there are many amusements both more honourable and more useful in which they are indulged: Therefore the Faculty think incumbent on them to prohibit both the students & grammar scholars from using the play aforesaid."

To add insult to insure, baseball is called dishonorable!

At the time Princeton housed students who attended college there, and in the basement of Nassau Hall grammar school students were also taught, thus the reference to grammar scholars in the faculty declaration.

Smith's original diary is housed in the Library of Congress. He would graduate from Princeton in the same year as his diary entry, 1786. He would go on to practice law in Philadelphia.

1. In the 18th century Princeton was sometimes called Nassau Hall, named after the building that housed the college; or alternatively the College of New Jersey. It wasn't until 1896 that it became known as Princeton University.