The older the program is, the more it is worth. Those from the 19th century are worth thousands of dollars. As an example, the first Harvard-Yale game was played in 1875 and a copy of the program (which is basically a piece of folded cardboard with the players names on it) sells for between $3,000 and $5,000. Similarly, a Princeton v. Yale program from 1881 sold for $3,000. The same program from Princeton v. Yale in 1894 has sold multiple times in the range of $250-$600. Stanford v. California programs are among the most collectible. 19th century programs from "The Big Game," tend to sell for $2,000-$4,000. 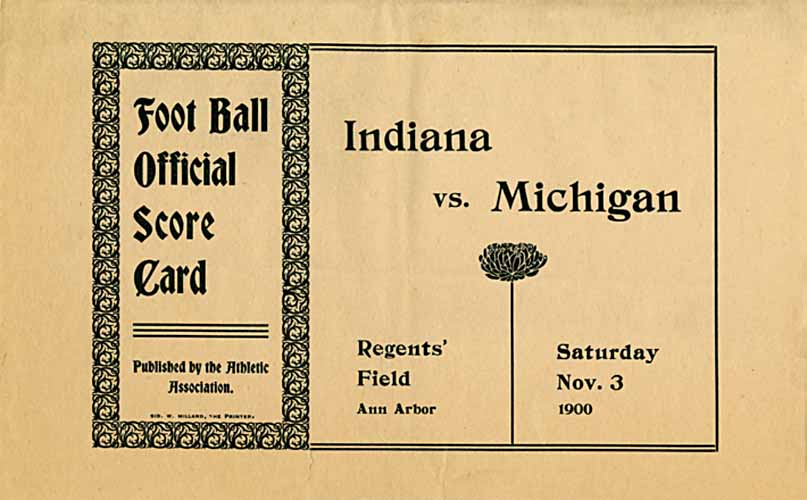 A Michigan v. Indiana football program from 1900. Simple and small but worth a lot

Condition is a significant determinant of value

Just like in real estate the three most important factors are location, location, and location. So too with vintage programs, condition is of paramount importance. Those that are torn, wrinkled or that have creases are worth less than those in better condition. The best judge of condition is your eye. As soon as you look at a program you can tell whether a program is in good condition. If the corners are not bent, there is no soiling or fading, there is no internal writing and there are no tears, it is in very good to near mint condition. Subtract points for any of the above to decrease the value of a program.

Some very early programs (late 19th century to 1920) were pasted down into scrap books. Scrap-booking was a very common thing for college students to do during the Victorian era. They would paste all manner of items into a scrap book as mementos of their collegiate experience. The good news is that scrap books helped to preserve thousands of items of ephemera that otherwise would have been lost to history. The bad news is that the back cover of some very early college football programs are either torn, missing paper, or have glue residue on them as a result of being removed from scrap books.

The appearance is not the only determinant of condition. You also have to use your nose. Programs that have been improperly stored or were in damp or moldy conditions will sometimes take on a musty smell. Programs that smell are not desirable.

The team(s) make a huge difference

If a team has a strong heritage of football at their school, the programs are worth more. Good examples are Alabama, Notre Dame, Ohio State, Penn State, LSU, Georgia and Michigan. Schools that are known more for basketball such as Syracuse, Georgetown, Duke, and Villanova don't command high prices for their football programs. Schools that have important rivalries such as Stanford and California, Army and Navy and Harvard and Yale also tend to be worth more than normal programs from the same era.

Famous people in the program

People of note that are in the program as players or coaches increase the value of the program. For example, Jackie Robinson played for U.C.L.A. in 1940. Programs of the 1940s generally sell for $20-$40 dollars, but a program with Robinson inside usually sells for $75-100. Gerald R. Ford, the 38th President of the United States, is featured in several college football programs from 1935 to 1940. Ford was educated at the University of Michigan, where he played on the football team. He turned down offers from the Green Bay Packers and the Detroit Lions and instead went to Yale Law School. Ford served as an assistant coach for the Yale Football team and is featured in many Yale programs of the late 1930s. Typical programs sell for $40-$60, those with Ford in them sell for $75-100. Richard Nixon played for Whittier College in 1932 and programs with Tricky Dick in them are worth $100-$150, about double what a normal program of that era would cost. Other famous people in programs include Jack Kerouac who played for Columbia University in 1942. Bobby and Jack Kennedy both played for Harvard football teams. Roger Staubach was the Army quarterback in the early 1960s and Joe Montana held the quarterback position at Notre Dame. Programs with any of them in them typically add $30-$50 to its value. Joe Namath was the quarterback at Alabama and programs with him in it are worth more than those of the same era without him.

One of the most prized football programs are those with Lou Gehrig in them. Although Lou is famously known for his baseball career he played college football at Columbia in 1922. Programs with Gehrig in them typically fetch $500.

Programs signed by a famous quarterback or coach can sometimes double or triple the value of the program depending upon the rarity of the signature.

Sometimes games have a special significance, such as those associated with a stadium's opening. The dedication game at Soldier Field in Chicago in 1924 was an Army-Navy game. Because of its special significance the program usually commands between $400-$500, significantly more than other Army-Navy programs of the era. Also, games played at famous stadiums that don't exist anymore such as the Polo Fields also command premium prices.

Sometimes the event that makes it special is the game itself, like the 1982 Stanford-Cal Berkeley Game, where the band came onto the field erroneously before the game was over. The program typically sells for over $100 (John Elway was also the Stanford quarterback), two to three times more than Stanford-Cal games of the same era. 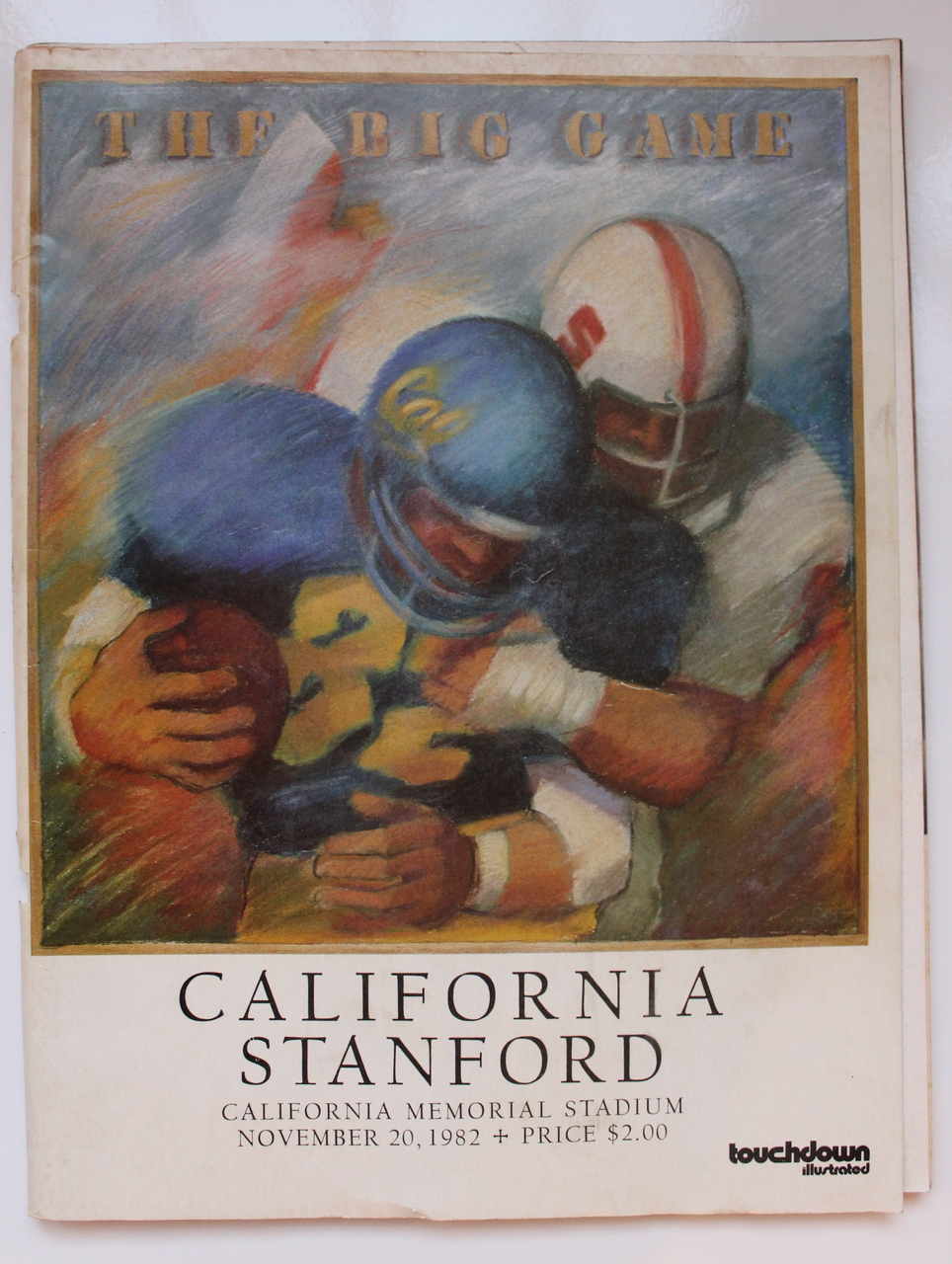 The cover of the famous 1982 Stanford-California game

Rose Bowl, Sugar Bowl, and Cotton Bowl programs would fit into the category of special programs, and are generally worth more than other programs of the same year.

Eye appeal is a factor in determining the price of a program. Programs designed by a famous artist or illustrator fetch more than those that have a standard photograph on them. A good example is this 1929 Yale-Army program (seen below) designed by John Held. Jr. Held was the preeminent artist of the Jazz Age who was widely published in the New Yorker, Harper’s Bazaar, Life Magazine and Vanity Fair. Held was famous for his depiction of the popular Roaring Twenties dance ‘The Charleston’ and his depictions of college-age women and in particular “the flapper”. 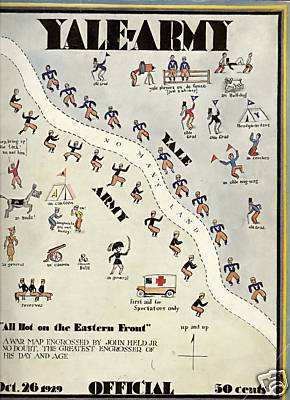 A beautiful illustration also increases the value, like this Columbia program from 1958, done by Willard Mullin, which would be worth $10-$20 more than similar 1950s programs. 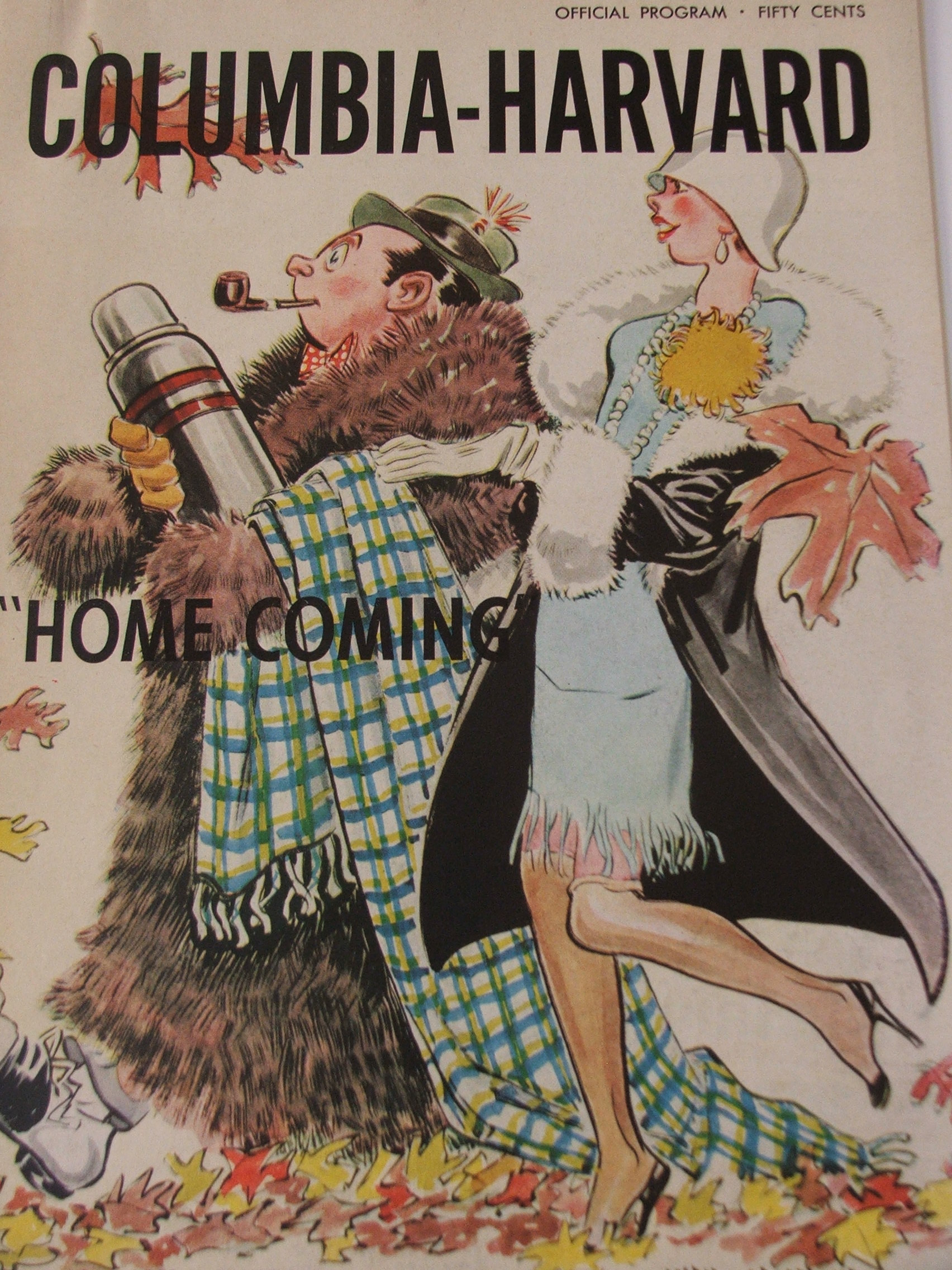 How to get a rough gauge of the price

Still unsure how to determine the value of a vintage college football program? eBay can be a good tool to look at how much a program is worth. Sometimes the prices listed for programs still for sale can be unrealistically high. People generally get all excited when they do an eBay search and see high prices for an item and assume their program is worth that. There is a reason it is still for sale, perhaps? A better way to look at values is to look at those that have sold, or in auction house parlance, prices realized. Go into the advance search feature of the  and click the box that says "Sold Listings," and run the search. It will give you prices of programs that have actually sold, a much better gauge of value than the asking prices.

A rough pricing guide is seen below, although this should simply be used as a starting point and all the factors indicated above have to be taken into account. We end how we began: A vintage college football program is worth what someone will pay for it. 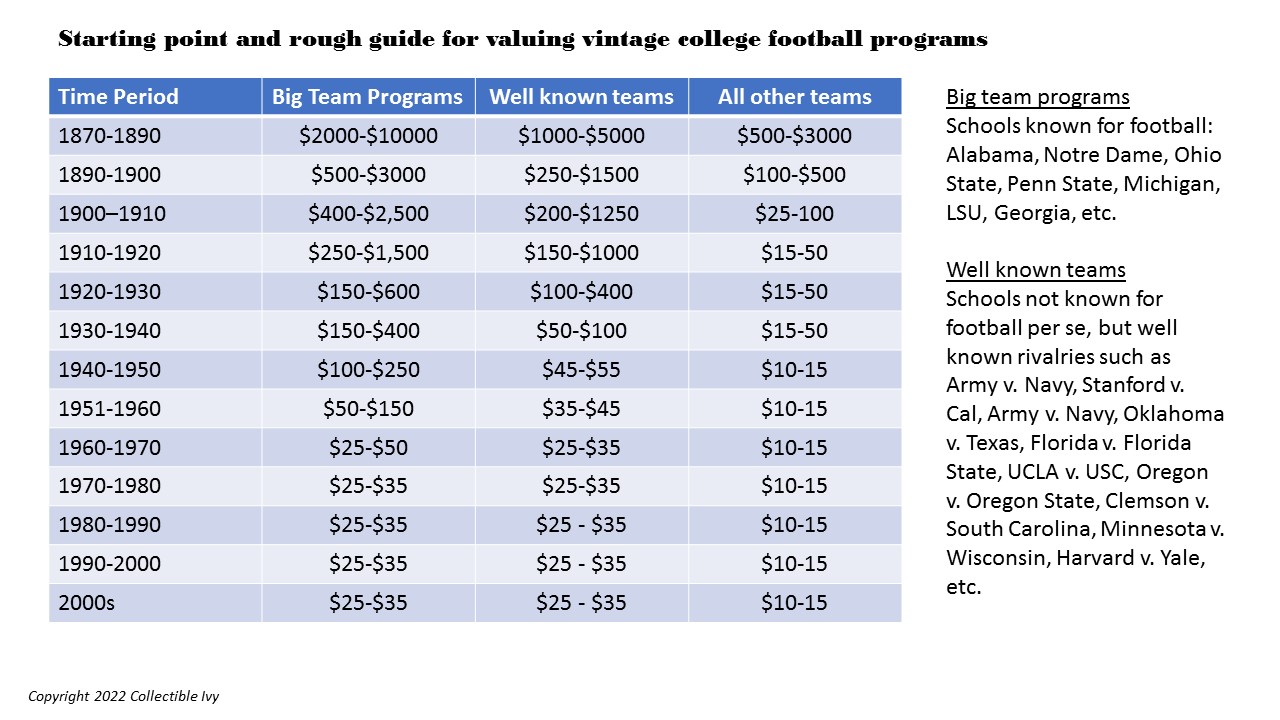